How to Reliably Spot Compulsive Liars in Business and Life

Note: I haven’t previously written any business-related posts on my blog but this is a category that I’ll be covering a lot more in the coming months.

This is a topic that’s close to my heart because I believe that the foundation of every strong relationship is trust and over the course of my ~eight-year business career, I’ve been exposed to what seems like an abnormally high number of compulsive liars. I can count four business partners and three bosses who demonstrated consistent patterns of blatantly fabricating the truth. And if it weren’t for my experience and frustration with liars then I wouldn’t have quit my last job and wouldn’t be living the life that I’m living now.

I’m not proud of how long it has taken me to reliably spot these types of people, but what started as a weakness has now morphed into a super strength. I hope that sharing my learnings and “liar detection framework” will help you to quickly spot dishonest people without having to suffer through the same painful lessons that I have.

My Background Story With Liars

I spent the first couple years of my career working in the urban music industry, an industry that at its roots is funded by drug money: notable artists who come from drug dealing backgrounds include Jay-Z, Notorious B.I.G., 50 Cent, Young Jeezy, T.I. and many more. It is a notoriously shady industry because of the level of desperation that the artists and many of the executives have or have dealt with in the past. As a recent high school grad, working in that industry and being exposed to many prominent, dishonest industry folks taught me how to quickly evaluate someone’s trustworthiness.

When I made the pivot out of the urban music industry and into tech (in Silicon Valley), I expected to encounter fewer liars. But despite the different backgrounds, it became clear that this isn’t an industry-specific issue as a great deal of the same lying tendencies and patterns exist in both communities. After only a few years working in the tech industry, I was exposed to numerous prominent and well-respected executives with clear, but not publicly acknowledged, lying tendencies.

One interesting thing that I noticed is that people in the tech industry are significantly worse at spotting liars than people in the urban music industry. I believe the root cause of this is that the average tech worker has been exposed to significantly fewer liars over their lifetime compared to the average urban music worker – so the tech worker tends to overlook critical signals.

Tech culture also tends to be significantly less confrontational than the urban music industry, where it’s not uncommon for issues to escalate into death threats or even murder. This means that tech execs who are known liars are significantly less likely to be called out directly or when someone does a reference check. For this reason, some very dishonest people in the tech industry are able to ascend the ranks without being exposed because their reputation doesn’t follow them as closely as it might in another sector.

If you want to know how to spot compulsive liars, here is my guide:

1. You never know until you know
One of the biggest lessons I’ve learned over the years is that it’s extremely tough to spot liars. And it’s hard to predict who’s a liar and who isn’t. I’ve been fooled by people who seemed like honest, genuine folks but over time revealed dishonest tendencies. The key for me is to trust my gut until the person shows their true colors. Just because I like someone doesn’t mean that they’re an honest person. You just never know until you know.

2. When it rains, it pours: if someone lies about small details, they frequently lie about more important things
Before I became adept at spotting liars, I used to give people the benefit of the doubt when it came to making up details. But I’ve learned that if someone is willing to lie about irrelevant, meaningless things, then you can be reasonably confident that they’ll change the facts when the stakes really matter. And while it’s true that everyone tells white lies, this is the best way to get tipped off that someone might have a pattern of lying.

I once realized that a very high profile businessman had a pattern of lying after catching him fabricating how much he had tipped servers. The odd part about this lie was that he spontaneously brought it up, unprovoked, to make himself look like a great person. After catching this and then paying closer attention, I began to pick up on many other false statements. If someone is willing to lie about something like a tip, you can be sure they’ll lie about metrics and other critical business details.

3. If someone is making up a story, he or she will frequently change details when retelling it
If it isn’t a real experience, people will forget how they told it the first time and night change the people who were there, events or other minute details. These are all key tells that someone may not be telling the truth. This isn’t foolproof because some people just forget real details, but this can be a key indicator of a potentially larger pattern.

4. When in doubt, fact check
Because I significantly value honesty and trust in all of my relationships, if I suspect someone to be a liar then I will fact check anything that I can to prove or disprove their behavior. This can be challenging because you can’t necessarily google most stories, but if they told a story that involved other people that you know, you could certainly ask those people about the events. Or if they mention anything that you can verify online or with friends, it’s worth looking into.

How To Handle Compulsive Liars:

I used to overlook people’s lying tendencies, but after a consistent pattern of working with liars, if I spot one, I try to quickly disengage from that business relationship or friendship. I quit a job three weeks after starting because I caught the CEO in a series of unforgivable and deceptive lies.

My firm belief is that life is far too short to spend time around people that you cannot trust. Business and personal relationships are both built on trust and if you can’t trust someone then what is the point of working with them or spending time with them?

You don’t have to abide by this methodology, but consider yourself warned! Hopefully, this helps you as you navigate the waters of honesty and truthfulness. If you disagree with any of this or if I missed anything, please let me know! 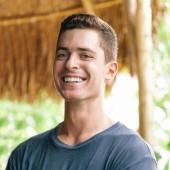 If I Had Seven Minutes To Live, This Is What I Would Share With The World

If You Run An Offline Services Business, Focus 80+% of Your Marketing on Reviews